How economies of scale work 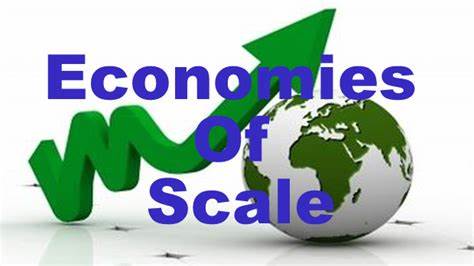 Efficiency is a driving force in economics: by producing products and services more efficiently, companies can offer lower prices, leading to more demand and higher trade. In turn, thanks to efficiencies, economies grow. Economies of scale contribute to economic efficiency which in turn reduces prices for people like you and me.

What exactly are economies of scale?

Economies of scale can emerge for various reasons, whether it is due to operational efficiencies or sunk costs that are unrelated to the number of units produced. Of course, economies of scale is not limited to the physical production of goods. Large-scale service delivery can also benefit from economies of scale as individual workers specialize more finely and due to synergies gained from scale.

When a company can reduce its costs internally the economies of scale achieved falls under internal economies of scale. There could be various reasons for this, including the size of the company or indeed the way a firm’s management is simply more capable of cost management than the management at another firm.

Examples of economies of scale

The number of factors that can lead to economies of scale are too many to list here. Factors also differ depending on the product produced, or the service delivered. Nonetheless here are several apt examples that explain how economies of scale work in real-life business:

We’ve outlined plenty of examples that explain how economies of scale function. Economies of scale are, of course, not always fair to everyone. Smaller companies struggle to compete against larger firms, for this very reason. In turn, governments can offer help to smaller companies including reduced taxes and other incentives to help even out the marketplace.

What are diseconomies of scale?

Simply put, when companies become larger, they also become more complex. Likewise, as a production process grows in scale, it also introduces more complexities. Though the initial increase in productions size will imply reduced costs, further increases can lead to higher costs because of these complexities.

Small companies rarely need to worry about diseconomies of scale, but larger firms should bear these factors in mind when increasing production and as a company grows in size. If they don’t they risk losing the benefits of economies of scale.

Limits to economies of scale

Aside from the implications of diseconomies of scale that bear down on large firms, economies of scale have other limits, particularly in today’s age of fast-moving technology. In some instances, small businesses can short-circuit the production process, while it can also be argued that the production of physical goods is playing less of a role in today’s economy compared to fifty years ago.

For example, 3D printing is an example of micro-manufacturing that can enable small businesses to compete in markets that were formerly the domain of large companies that poses huge economies of scale. Set-up costs in some fields are also lower than it used to be, allowing businesses such as micro-breweries for example to offer a competitively priced product.

The global outsourcing network has also leveled the playing field between small and large businesses. Smaller concerns no longer need to spend huge amounts on full-time salaries or expensive third-party contractors. Instead, small businesses can get the skills they need at the same price that a large business would pay.

At some point, a company will run out of market demand for a particular product or service, and out of options to increase marketable production to the extent that further economies of scale can be realized. Economies of scope provide an alternative, allowing a large business to enjoy ongoing economic efficiencies by diversifying its product line.

There are a couple of ways to go about it. A company could simply add additional product lines or enter altogether new but somewhat related markets. Another way to achieve economies of scope is to acquire companies that operate in similar markets.

Why economies of scope also count

From the Outside-In: The Path to Relevance