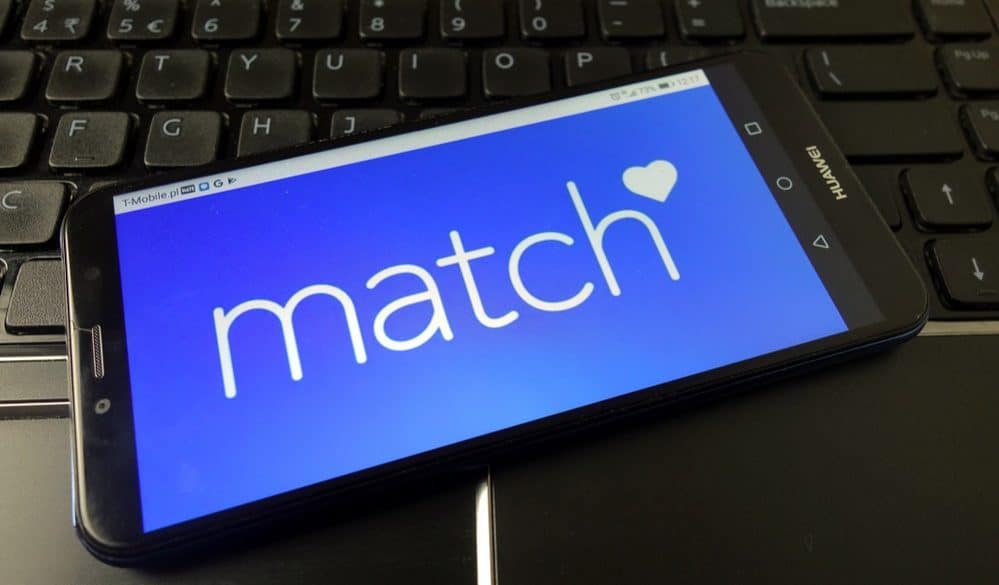 The dating industry has become oversaturated with dating websites and applications. Some require payment upfront, while others don’t appear to properly vet those who sign up. Despite this, there are some that appear to be more popular than others, which is where Match comes in. I, like many, have heard the various stories from those who have tried the online dating website and who swear by it and those they encounter. If you want to know more about this dating platform, you can keep reading below for our Match review. 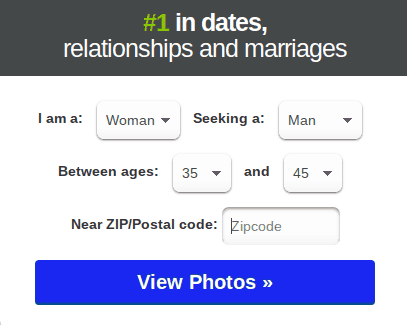 Match is made for those who have lost hope in the idea of finding someone new. If I’m being honest, we’ve all been there at some point, and the idea of online dating is intimidating. With both the stigma behind it and how difficult it can be to find someone who is both honest and upfront, it’s no wonder why so many people are hesitant about online dating.

Match is also one of the older online dating platforms out there. In came out in 1995, which was 5 years before eHarmony. The website promises you that if you haven’t found someone within the first 6 months, you’ll get 6 months free. With Tinder so prevalent among younger users, I was initially curious as to how this would match up.

Match is a dating website that is tailored to those who are looking for something serious. On this site, you’ll either find being in their later 20s and older or you’ll find business professionals. Overall, this site isn’t made for younger generations unless that have an increased or impressive sense of self and sense of confidence.

The Benefits of Match

Now that you know a little bit more about the website and application, it’s time to look at the benefits of using it. 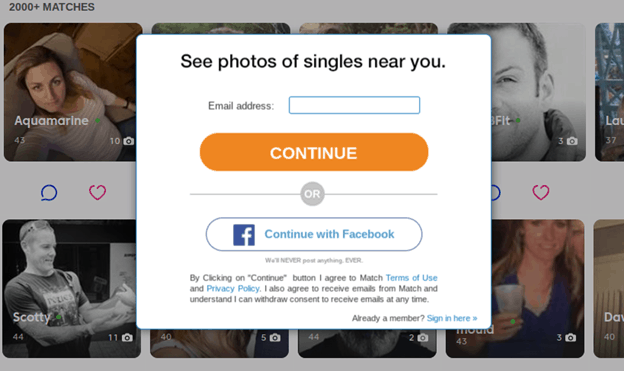 This is what the website looks like when you enter the URL. You’re asked what you’re looking for, your email address, and your postal code. This will help the website to narrow down your options.

Match does ask you the usual questions about yourself. You will, for example, have to answer questions about your physical appearance, religious beliefs, and your hobbies. For some, these questions might feel redundant; however, I found them absolutely necessary. They eliminated the need for small talk and instead, I was able to have meaningful conversations more quickly. I was able to weed out the people that weren’t looking for the same thing that I was. Opening my account only took about 5 minutes, which is significantly less than some of the other dating websites I’ve tried.

You can place priorities

Being able to prioritize was one of my favorite parts of using Match. You can write what you prefer in a partner and then you can rate how important those qualities are to you. Match will also consider these qualities before presenting someone to you. If, for example, you claim that having someone who doesn’t drink is a priority, they won’t show you people who are heavy or social drinkers. Being able to do this ensures that both people in the match start off on the right page. After your first questionnaire, you can also fill out some of the other sections they have available to get results that are tailored more closely to you.

While a lot of dating websites seem to spam you with pop-up chats asking you what you need and asking you if you’re interested in joining, I appreciated that Match tries to keep it simple. I found it easy to find everything I was looking for and I didn’t need to maneuver my way around advertisements and chats. The homepage was also sleek compared to websites like Plenty of Fish.

The way matching works on this platform reminds me of Tinder. You’re provided with a match and you have the opportunity to skip it or to match with it. I thought that, compared to Tinder, the strength of this website is that you receive a significant amount of information about the people you’re being matched with. You are also only presented with one match at a time, which is better than applications like Grindr, which provides you with a list of profiles to sift through, all of which are stacked on top of each other. As you move through the people you’re presented, Match will analyze the people you skip to present you with potential matches who suit what you’re looking for more efficiently.

It’s not just about hooking up

This might not be an advantage for everyone, but this is something I prioritize. Match is a relief for those like me, who are tired of trying to find something serious among a series of people who are only looking to hook up. Most of the people I spoke to on this platform were completely genuine and were upfront about what they were looking for on the site.

You can meet up in a group

I didn’t try this myself, but the overall concept of it was fantastic. You can remove the pressure of going on a date by meeting up with a group of people. For those who are traveling, you can look at local events and attend one for your date; otherwise, someone will host an event and you will be able to join your group at a predetermined location.

You have to pay

While the majority of dating platforms provide you with a functional, free version that you can later decide to upgrade, Match’s free version isn’t all that functional. If you’re using the free version of the app, you can’t message people. The bad news about this is that if you have a tight budget, you may not be able to find your match as easily as you would otherwise. The good news is that the longer you subscribe, the less you’ll pay in the long run. You may want to consider that other websites or platforms like eHarmony can cost you almost $50 per month. Here’s a list of the price plans you can find on Match.

Personally, I would only find it useful to get the 6-month plan at most because, as I mentioned before, Match promises to provide you with 6 months for free if you don’t find someone within 6 months.

There isn’t a diverse demographic

While you can find someone of any age on Match, you won’t be able to find as many younger singles as you will singles in their late 20s and 30s. This could easily be solved with some advertising that is well-placed. There also doesn’t appear to be any marketing or intentionality behind recruiting more people in the LBGTQ2+ community. Some of Match’s other competition, like Tinder, is tailored more toward a younger population and apps like Grindr are tailored toward the LGBTQ2+ population. Because of this, Match is limiting itself to an older demographic. On the other hand, this demographic appears to be more serious about creating lasting relationships, which is Match’s intention in the first place.

This is one of the things that bothered me the most out Match. The moment I signed up for the website, I was sent messages about potential matches. I was pretty surprised by this because there aren’t any popups on the homepage itself. Match allows you to update your email preferences on the website; however, if you don’t know that right away you’ll find that you’re spammed with a few dozen emails before you’re able to change your settings. For me, this was extremely frustrating.

For some people, sharing the amount of information that Match asks you to share may not be comfortable. While I appreciated how upfront it was, I can imagine that some people find it thrilling to get to know a person from scratch, and this feeling can be forgotten on Match. In my own experience, I found that people on Match could move too fast for me. While I appreciate how upfront the platform is and how much information we’re given, I also like to ask questions based on that information. Some people had the tendency to skip any of the information they already knew, so it was rare that someone would ask about my job, religious beliefs, etc. 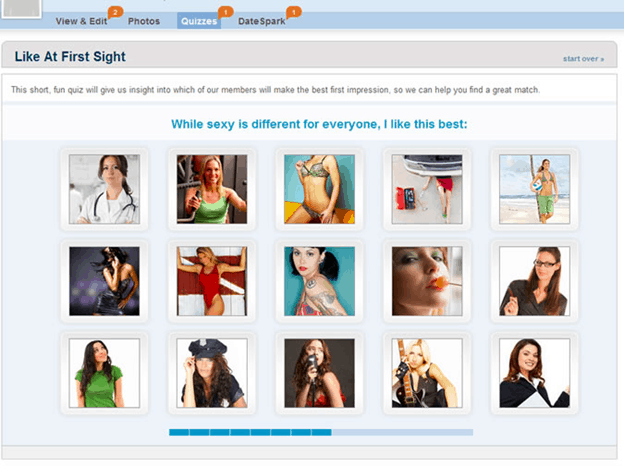 Admittedly, I only went on one date with Match. That one date, though, was pretty impressive. It isn’t hard to find single people in Montreal, but it is hard to find people who are genuine and who are willing to invest time in a relationship.

We went to one of the many “hidden bars” here. At first, I wasn’t too sure about going with him because many of the hidden bars around are in back alleys and unmarked buildings, but the moment we went in and sat down it was great. It wasn’t so much a bar as a speakeasy. He made reservations in advance, held the door for me, and pulled my chair out before I sat down. These are all acts that I thought had died off by now, but I appreciated him for it.

The date itself was of higher quality because we already knew quite a bit about each other based on Match’s application and information system. We already knew about each other’s careers, kids, religion, etc., so any questions we asked each other were more targeted for the individual. In my opinion, one of the worst things about going on dates is that you have to retell your entire life story over and over. I didn’t feel the same way after using Match’s system.

Match isn’t the only option out there for singles, so it’s also important to look at how this platform compares to some of its competitors.

Tinder is probably the most well-known dating application out there at the moment. Where Tinder surpasses Match is in its free plan, which is completely functional and which allows you to find matches without having to pay money. Tinder is also tailored to a lower age group and advertises to a larger demographic. Tinder does, however, have the reputation for being an app for hooking up, and I’ve found that it can be difficult to find people who are honest about what they’re looking for from a person.

EHarmony is a known dating platform and is considered a veteran in its field. That being said, this platform also has a very large tier system for matching you with people and it is tailored for those looking for a serious, long-term relationship.

This platform is known for prioritizing customers and for tailoring to a larger demographic. They’ve made it clear that they support the LGBTQ2+ community and as such, have gained a significant amount of traction among younger generations.

I was skeptical when I tried Match, but my concerns were quickly reduced. I was under the impression that, because it’s a “veteran” dating platform, it would be out-of-touch and it wouldn’t be very innovative. Instead, I was pleasantly surprised. Match provides users with a system that helps them in creating informed decisions about potential matches so that they aren’t taken by surprise after going on a date or after talking to the person for a while. 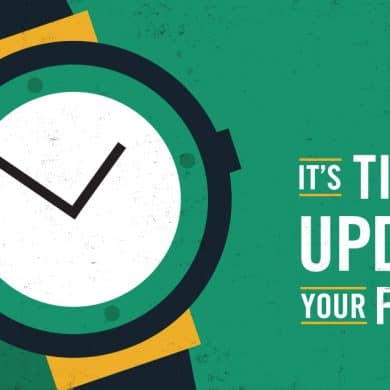